How could we (seriously?) measure a guitar soundboard?

After writing my first post I asked a friend who’s into psychoacoustic to proof read it and I got one interesting remark back; in my discussion there were not quantitative measurements shown.

At the time of experimenting on my OM guitar I used my beloved Clio Pocket, but I forgot to save the results of the investigation. Now that I reflected a bit more about how to measure a guitar soundboard  in a consistent and repeatable way I wish to spend a few paragraph on it.

“Follow me through this disguise” and let’s pretend we’re engineers!

I wish to approach the topic from both the engineering and musician points of view in fact, but let’s try to summarise the constraints first:

The engineer inside me knows immediately that point 1 requires a compromise: if the strings are on, we need to “inject” a test signal as if the strings were moving. The test signal could be either pink noise (a complex random noise which is tailored to mimic the complex behaviour of almost all natural noise/sound sources) or a sine sweep (a sinusoid that ramps up from very low tones to very high ones).

Having worked with prof. Angelo Farina for a good part my career and owning him a lot of knowledge (especially this one is worth reading carefully), I normally use the second approach. There are several commercial implementation of this technique, and also you can use it very cheaply. Aurora plugins (with sine sweep generators and convolver and what not) are available as a working demo.

Now we need to find an efficient way to inject the test signal; how do we do? Here is where exciters get their role in the play. An exciter is a speaker without a cone (ok this is crude, but 80% true), and in which the voice coil former can be attached to a surface and thus transmit vibration (more accurately force or acceleration).

The solutions to point 1 is then to stick or glue a very light exciter (otherwise you drastically change the mass/stiffness of the soundboard) on the guitar bridge. This is not easy, because of the presence of the pins and because the bridge is not flat or large enough. I guess my best choice will be to attach it to the bridge plate inside the body. 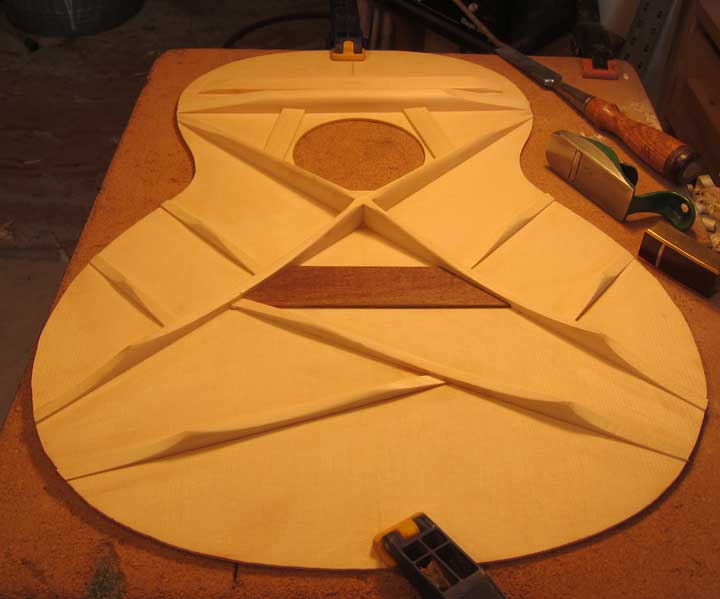 In fact, if we were lucky to have a very small exciter, with a voice coil diameter of 10 to 15 mm it might even be possible to put it on the very bridge; we’ll see later whether there are big differences if we could experiment also this.

Moving to point 2, how can we measure the acoustic response? What about the tactile one? We surely need a microphone for the former and an accelerometer for the latter, but again, where shall we put them? If we dared to search “how to mike a guitar” we’ll be probably here for the next two months or so, so let’s be drastic for once.

We are not interested in a subjectively nice tone, we need a repeatable measurement; we could then get used to it (if we listened to the recorded signals) or get used to stand in front of the guitar in the same spot to correlate the plots and graphs we’ll get with our personal experience.

On the other hand we could go for a power response measurement, which is in fact a complete spatial average of the response, as if we could put all the acoustic output of the instrument into a black box, iron it, and get a single frequency response out of the process.

The complicated bit of this intriguing approach is that you need a reverberant room to do the spatial average. And we do not have it at home. Final practical answer to this is then to place a measurement mic one meter in front of the instrument, at the center of the soundboard hole.

What about the accelerometer? This is cool because as soon as you play live you already have an accelerometer inside your guitar, without even knowing it. It’s the under-saddle pickup you use in every gig. I agree with you that it does sound coloured and (normally) harsh/bad/choose your blaming here, but it captures vibrations and give us a clean signal we can then process.

And it’s firmly inside the bridge, with no chance to move or being altered by our experiments, which is very reliable. Moving to point 3 requires a bit of imagination: we might be interested in doing the measurements and, afterwards, see if they are similar to what is called an acoustic dipole.

If this is true (and in the meanwhile you can look up and find out what a dipole is here or here), than the proof will be achieved.