Acoustic surgery – Or, How to save a guitar from mediocrity?

Posted on 20 luglio, 2017 in Musical Instruments

Dear Reader, this is an emotional moment for me, because you’re reading the first article of my acoustic journal.
I will try my best to be at the same time accurate and NOT too technical, because the intention is not to please my ego, or a few more egoss belonging to true nerds (like me), but to suggest new ideas and discuss interesting topics which, in the end, should be evaluated with feelings suggested by our ears and brains. Let’s start!

I play guitar since 1994 and in the past 5 years I stepped deeply into acoustic blues and fingerstyle. Accordingly, I started a quest for a new guitar and I was a hungry review’s reader, because I didn’t want to invest big money from the very beginning (which is in fact something that I always end up with once I glean a little knowledge). I was lucky to find very interesting books, like this one by Dick Boak, which is a great  insight if you’re curious about materials and building techniques.

After the time spent on researching, I’ll describe my requirements using some “business manager” expressions, namely two “must haves”:

And three “nice to have”:

Initially I was not certain of the budget, because wood can be very expensive at times, but now I can tell you that you can find all this in the 500-700 Euro (or dollars) range. I eventually discovered a manufacturer named Recording King which makes replicas of classic American designs; my choice was an OM model.

It has rosewood back and sided, sitka spruce, single piece mahogany neck. I’m not affiliated with the brand (unfortunately), but it was the only one satisfying all requirements. In fact the finishing was very thick and the overall cosmetic was not my cup of tea, but the tone was good for the price.

Convinced by the quality, in 2014 I bought a Dreadnought from the same manufacturer, then a 000, and in both cases I noticed that while the OM was a nice start, it simply was mediocre compared to the other two instruments, which are to my opinion truly exceptional.

In 2017 I had the privilege to directly compare my OM with a boutique one made by Dana Bourgeois, with the same specs on paper: rosewood back and sides, sitka spruce and single piece mahogany neck.
The experience was an eye opener, because while I always noticed the OM lacked bass compared to (for example) the Dreadnought or the 000, I always assumed that the body shape was the main reason for the tonal differences.

Having heard for the first time the tone richness of a handmade instrument I was inspired to investigate about the physical differences and to experiment with some DIYing.
The results is visible in a short set of pictures below:

Starting to remove the varnish. 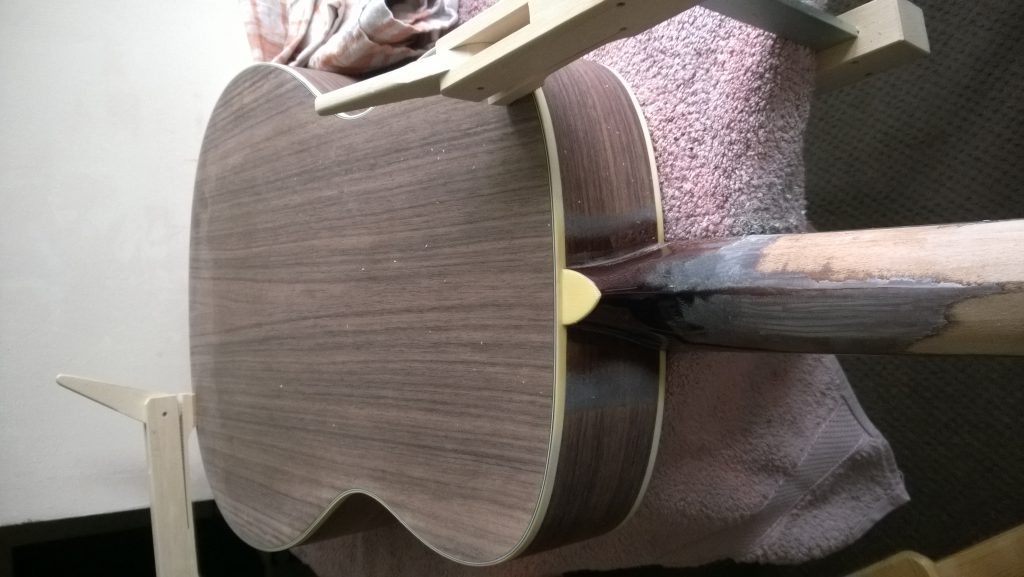 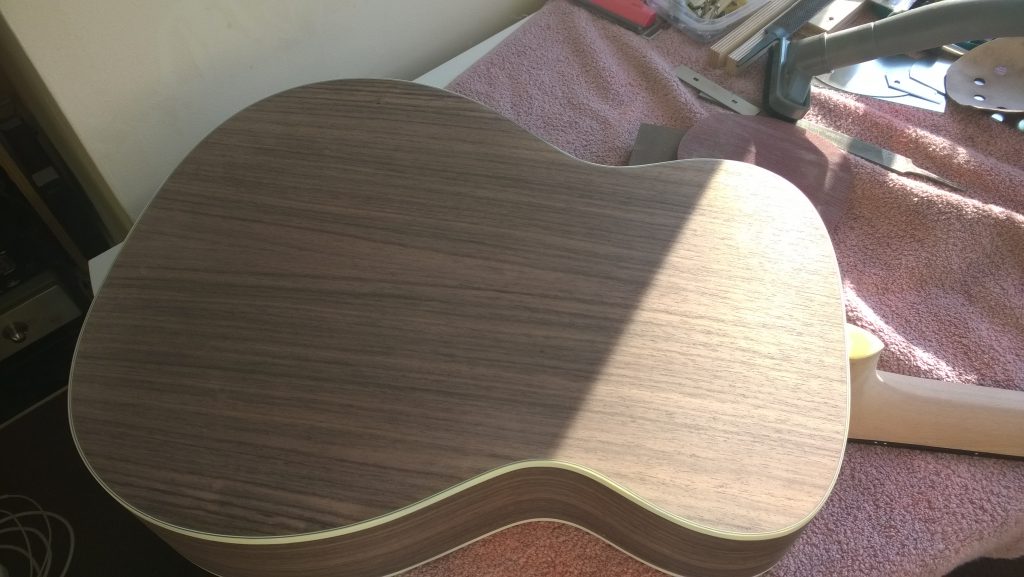 All body sanded down to bare wood. 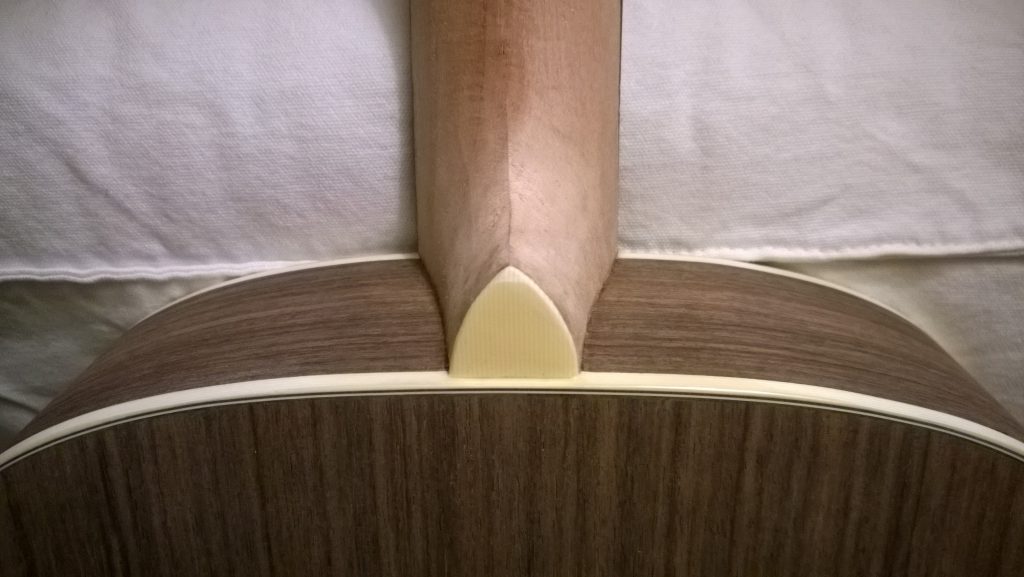 At this point I put together again strings, bridge pins and pegs, and I tested the tone again. Playing an un-varnished guitar is a bliss, because the tactile contribution from the wood is a total new level of involvement while playing.

This suggested me two important modification to be done: firstly to alter the shape and weight of the internal braces; this came from both measurements and listening experience while comparing the artisanal guitar and my copy.

Secondly, the new varnish should have kept as much as possible the tactile contribution I was feeling. It was possible to tune the E and A strings only by feeling the beats on my belly, which is quite handy while playing in a very loud club with these “not so perfect” P.A. systems. But how to move on?

I found out that using a small LED light inside the guitar body, while looking through the hole of the pickup at the bottom of the low bout, I had a clear view of the profile and extensions of almost all the braces. I started tapping the board as per many suggestions by several famous luthiers and I tried to focus on few harmonics, if they shifted and/or changed level.

In the end I reached a quite radical result, cutting off good part of the long part of the X braces and substantially shaving the small secondary ones. At this point the guitar sounded rounder, producing much more energy in the region between 70 and 90 Hz. Musically speaking, the low E now sounded as loud as the A, and when using drop D the level of the lower D was finally higher than the one of the high D.

I then asked a colleague at Tannoy a few suggestions for a “tactile transparent” lacquer. He gave me a sample of a product called Treatex: it is a mix between wax and oil. You apply it with a brush, baffle the extra off with a cloth and leave it dry for 12 hours. Then you can apply it again if needed.

The final results is extremely satisfying from the cosmetic point of view, leaving the wood a pleasant “open pores” look, but still hard enough to stand scratches; 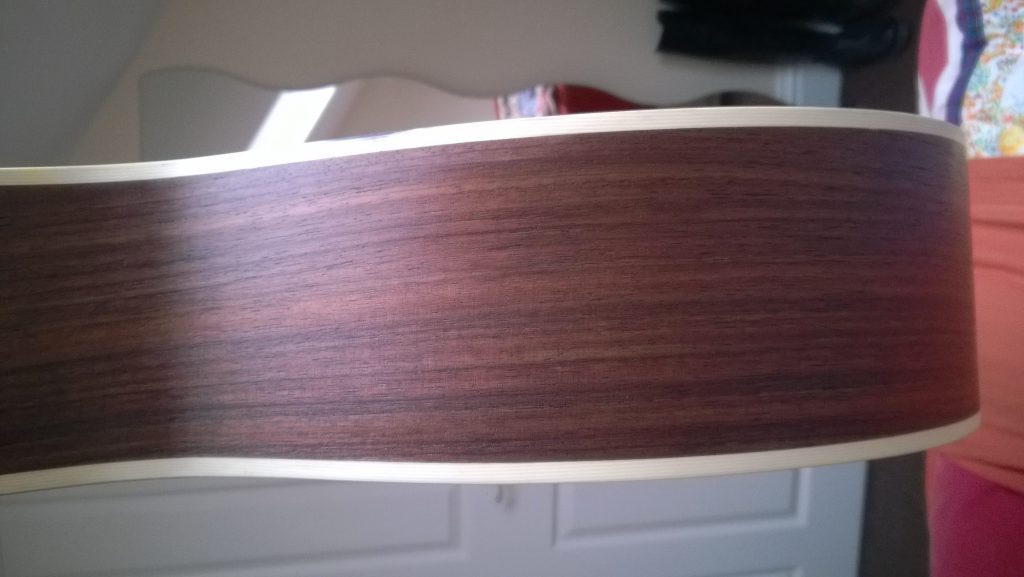 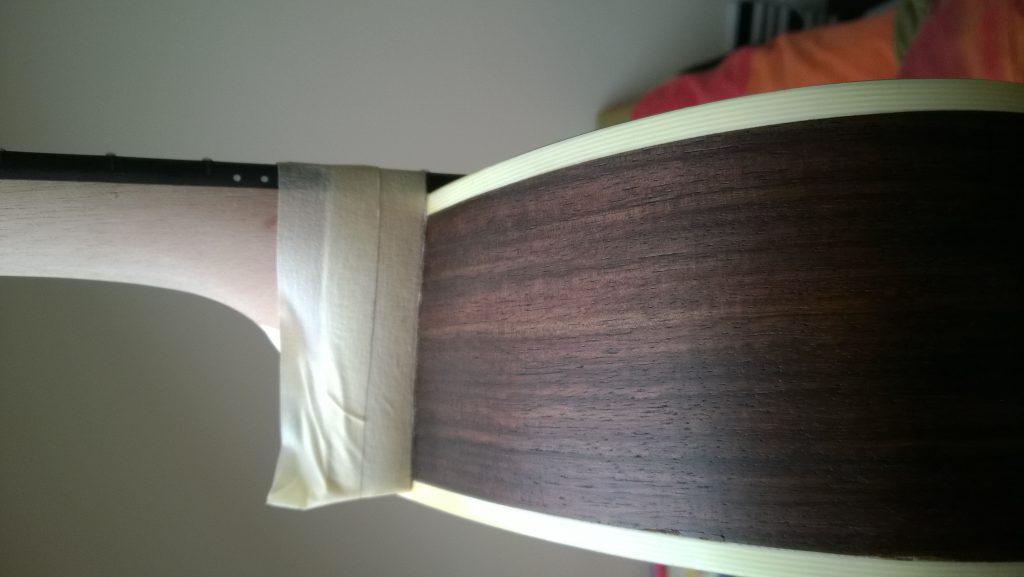 It is a serious improvement over the original varnish and, I dare say, over any polyester based lacquer used in most of serial made instrument. A nice plus was the overall weight, which was reduced – sad but true, by an enormous 620 grams!

A note about the time it took for the modification. Even using a sanding machine to remove the main portion of the original varnish, it still took at least 12 hours to sand the instrument down completely. After that I’d reserve three hours for working on the braces and then another three to four days to complete the finishing.

Was it worth doing? Considering how much I learnt through the research, and how magically instrument tone grow with time and playing, I’m very curious to repeat the comparison with the Bourgeois in a year or so, but from the very beginning the improvement was audible. It means YES!